How to Use SUBSTITUTE Function

Let’s first grasp what a Substitute Function is and when to use it. Before we figure out how to use the SUBSTITUTE function.

What is a Substitute function?

A Substitute is a person or a thing acting or serving in place of another. Substitute function replaces/swaps a set of characters with another in a text string.


For example, you can instruct the computer to substitute ‘and’ for ‘&’. Now, your instructions have to be clear if not the computer could interpret ‘Ander’ for say ‘&er’. When can we use substitute function?

We will talk more about REPLACE function in our next article. The instruction given to the computer while on the excel platform is called the SYNTAX. This command is:

For example, you can tell the computer to substitute ‘and’ for ‘&’. Now, your instructions have to be clear if not the computer could interpret ‘Ander’ for say ‘&er’.

Note that the SUBSTITUTE function is case sensitive. (Take a look at the highlighted words above). Though the instructions were the same, the results were different. The reason for this was the use of Capital “A” in the second case. 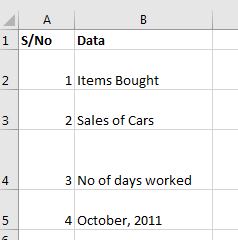 Step 1: Copy the above data in a new spreadsheet. Take note of the Column and Rows.

Step 3: Under the result column, type in your instructions:

Note: Start with “=“ and there is no space between SUBSTITUTE and the bracket open sign

If done, your result column will look like the one in the picture above.

Step 4: Let’s write out the instruction again so we can very much remember it. This time we will write it under the Formula column. Type in

Note: Start with a “Spacebar”.

Step 5: Also for clearer understanding, let us give a description of the formula we used. So under the Description column, type in Step 6: You can now hide any of the columns you don’t want to be displayed. You can always unhide it at any time, most especially for reference purpose.

In our case study, I will hide the Formula and Description columns

First, you select the column/columns you want to hide.

Next, right click on the mouse to bring down the menu

It will look the picture above

Note: To unhide, select the columns bounding the hidden column/columns. Right click on the mouse. Then select Unhide in the drop-down menu. Result: We have succeeded in the used of Substitute Function.

By Vijay Galiya
1 Mins read
Information: A software company that has two sales channels: direct and partner. The sales manager created this dashboard to track opportunities and…
Power BITutorials

By Vijay Galiya
1 Mins read
Information: It analyzes a manufacturing company’s spending on vendors by category and location. we explore these areas: Who the top vendors are…
Power BITutorials